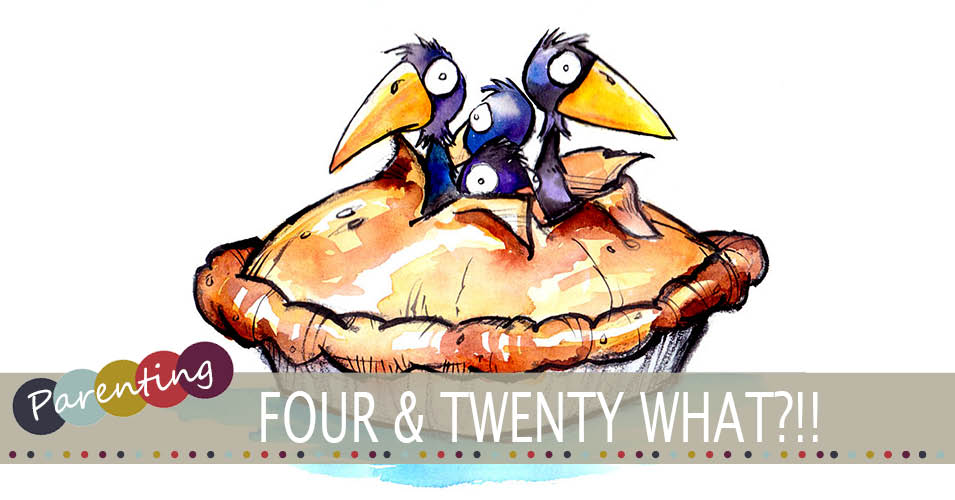 Nursery Rhymes have featured in our day to day lives since Munch was born. I never really paid them much attention before. Until I bought a Nursery Rhyme CD and now I’m listening to them on a loop in the car.  When I began to pay attention to the words and thought, four and twenty WHAT?!

From having listed to said CD extensively, I have deduced that there is a recipe to the perfect nursery rhyme.  There has to be an element of terror, scenes from an over active imagination and just the downright strange.

Take the case of Rock-a-by-baby.  A tradition lullaby.  I can’t think how these lovely sweet words are meant to be sleep inducing:

Rock-a-by-baby
On the tree top,  (Hold on a second. Exactly why is the baby on the tree top?  Is it one of George Clarkes Amazing Spaces?)
When the wind blows
The cradle will rock.
When the bough breaks,
The cradle will fall,
And down will fall baby
Cradle and all.  (Mmmm….I think the authorities might have something to say about that!)

Sing a Song of Sixpence is another peculiar situation:

Sing a song of sixpence,
A pocket full of rye.
Four and twenty blackbirds,
Baked in a pie. (Quick call the RSPCA!)

When the pie was opened,
The birds began to sing; (They resurrected during the baking process?  Just as well it wasn’t Cottage Pie! )
Wasn’t that a dainty dish,
To set before the king?

The king was in his counting house,
Counting out his money;  (He should be very careful flashing his cash like that)
The queen was in the parlour,
Eating bread and honey.  (Not caviar then?)

The maid was in the garden,
Hanging out the clothes,
When down came a blackbird
And pecked off her nose (Well it’s no wonder really.  I’d want to peck off a nose too had I been wedged in a pie with 23 other birds and then baked!)

Perhaps the most random one of all, is 3 Blind Mice:

Three blind mice. Three blind mice.
See how they run. See how they run. (This is starting to sound like rodent torture trial.)
They all ran after the farmer’s wife,
Who cut off their tails with a carving knife, (The RSPCA will be busy, if nursery rhymes are anything to go by!)
Did you ever see such a sight in your life,
As three blind mice?  (Eh, no.  Never.  Infact I’d bet good money that I won’t live to see that.)

I’m sure there will be some logical explanation behind these nursery rhymes.  If anyone knows them, can they please answer Munch’s question of why the kings men couldn’t put humpty together again?