MM’s birth story is something I always intended to write, it’s just something I never got around to putting down in words until now (some 9 months later).

As you’ll know, if you followed my pregnancy journey, my body doesn’t do child bearing very well.  With each pregnancy I have suffered with HG (severe sickness) seeing me hospitalised very early on each time and also later in pregnancy with really bad SPD, which again has meant hospitalisation and a concoction of pain relief.

It was no different with MM. I was under consultant care due to the birth I had with Munch, so when I went for my appointment at 36 weeks they admitted me a few days later.  I was always going to have a planned c-section due to the previous birth experience and continuing complications since. I was told that in our region they don’t carry out planned sections until at least 39 weeks, to reduce any risks to baby.  So I would be in hospital for some time.

Spending the last few weeks of your pregnancy in hospital isn’t on anyone’s cards.  I had already spent so many months separate from day to day family activities, so I knew this was at least the last hurdle.  My consultant who admitted me was the same consultant I had with Munch and she was very understanding about my case.  However, It was a different situation on the wards. I’m unsure whether it was lack of understanding of the condition, or just hospital politics.

I have no idea what went on behind the scenes, but my c-section date kept creeping forward.  Until at 37.5 weeks a really lovely consultant told me they would carry out my section the very next day.  Moving me from being last on the list on a Friday (so potentially was facing a Monday section) to a Thursday morning.

It was a strange feeling, having prepared myself each time the date changed and then having less than 24 hours notice that I would get to meet the little squish I’d been growing all this time.  I remember calling Hubs and he had to rearrange a few meetings with clients, reasons don’t get more outrageous than that! Munch came in the night before and I had a shower and Hubs washed my hair (no mean feat when you can’t walk and are in agony).

In the morning I was beyond excited.  Second time round you know what to expect, the feelings involved.  It felt like forever waiting to go down for my turn.  When I was eventually wheeled down and Hubs was directed to a room where he could get his scrubs on, I instantly started to cry…I didn’t even mean to.  I knew I would be reunited with him in theatre but it all of a sudden became so real.  I was dreading the the whole epidural thing…I’d had a whole 37 weeks to wind myself up about it and any moment now it was going to happen.

They only have 2 theatres and I was due to go into the first one…the one I was rushed into 4 years previously.  I recognised the wooden entrance when I was waiting in the corridor.  At the last minute however I was changed to the second, newer, one.  I was quite relived as I didn’t have fond memories of that situation and I didn’t want to associate that with MM’s birth.  The staff were so kind and when they saw how upset I was, they told me that Hubs was welcome to join me for the epidural and I breathed an instant sigh of relief.

We had a bit of a wait, whilst the second theatre was prepped, before being wheeled in with Hubs by my side. All the staff were wonderful…a stark contrast from upstairs! We all had a little joke and a laugh.  The epidural wasn’t even painful…just odd.  I was laid down as we waited for it to take effect.  I was terrified that they would start before I was entirely numb and it felt like we waited for ages before things got underway.

Comparing it to Munch’s birth (as you do) it was completely calm, relaxed, happy, quiet and I just lay there chatting away to the Hubs whilst the most strange pulling and pushing sensations were happening behind the screen. After a few minutes they announced that she was out and we got a quick look before she was over getting weighed and wrapped up. Tears instantly started to roll down my cheeks.

Munch was an absolute shocking weight at over 8lb, so when they shouted over that she was 5lb 13oz we were both quite stunned.  Sure, she was a few weeks early but Munch was born at the same gestation. 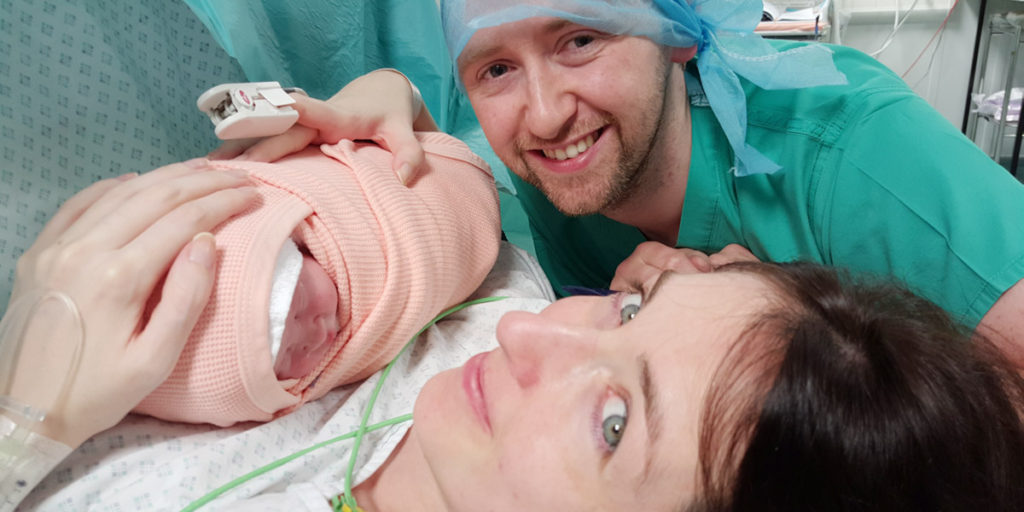 She was brought over and passed over to me first and I just held her, soaking up all that yummy warmth.  Taking in her little face and kissing her little cheeks.  She didn’t cry, she just lay there with her eyes shut.  She had no eyebrows or eyelashes really.  It was an absolute dream come true being able to hold her for the first time and being able to enjoy it.  There was no panic and no taking her away from me.  I could have held onto her forever, but I had to give Hubs a little hold.

We weren’t allowed cameras in the theatre, but clearly it’s something they are used to and so sneaked in a few shots for us on our phone.

It wasn’t long before we were taken to a recovery room and offered tea & toast.  I got to do some skin to skin for what felt like an eternity and also give her the first feed…all things I missed first time around.  My heart swelled with love for our little MM, as our family was now complete. 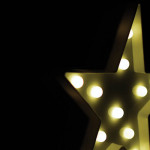 Putting Our Energy Use Under The Microscope 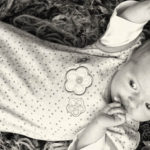 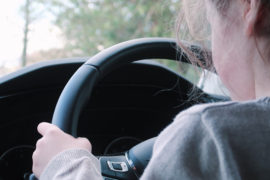